The project mainly addresses common challenges and problems in the CB-area, related to the local biodiversity and vine varieties, especially those in Natura 2000 sites. The high level of local biodiversity is threatened by undesirable loss of genetic material due to climate change and human activities related to agricultural, tourism and urban development. Reduction or even disappearance of many local vine genotypes is the result of the contemporary wine production and the introduction of new varieties over the past years. Despite the introduction of foreign varieties, local ones have excellent adaptation to the microenvironment and their cultivation is contributing to the sustainability of natural resources in local level.

Being part of one local eco-system, the vine varieties in the CB-area are not biologically influenced by the administrative borders.

Their protection and conservation requires common measures and activities, which is the approach that this project provides. The project activities include:

– joint DNA analysis and research, joint trainings and workshops for representatives of the target group and the development of an Integrated Strategy for management of local biodiversity in terms of traditional vines.

The project will add high CB-value to the local management of eco-systems through the development of joint recommendations to relevant authorities and through the implementation of joint pilot actions such as the development of experimental fields for traditional vines and a specialized Ampelographic book. One of the main project activities will support the long term conservation and protection of local vines through the launching of the procedure for Protected Designation of Origin. This will contribute to the spread of traditional vine populations of both CB-regions , giving them unique identification and image, not only in national, but in a world level,

The main project objective is to promote and enable the long term conservation of vines, especially those in Natura 2000 and moreover to improve the conservation status of local vine varieties; to analyze and sustain local species through joint scientific wo...

Target group
Main target groups and final beneficiaries under the project will be: national, regional and local relevant authorities working in the field of environment protection, biodiversity protection, agriculture, viticulture; protected areas management bodies; research institutes; environmental NGOs; branch organizations; local population – farmers, vine growers in the eligible area of BG and GR. The target groups will benefit not only directly from the project activities, but in a long term after the project implementation, using all developed outputs. Read more

Under the project we will create the identity of the project, deliver messages and involve all stakeholders in the implementation process. The envisaged activities will promote the project objective and aims. We will inform the target groups and beneficiaries about the opportunities to participate in different events, trainings and scientific workshops. The local population will be informed regarding the benefits of environmental interventions within the action and how could local people contribute to preserve the endangered vine varieties. The Lead Beneficiary Executive Agency on Vine and Wine will ensure the coordination, management and general implementation of the entire project. There will be organization of local events and information of the target groups and media.

The project activities will also include the implementation of scientific research and organoleptic analysis of local vine varieties in parallel with individual meetings with the local population (farmers) and 2 workshops with the external experts hired. Relevant experts will collect samples from the fields of the CB area and will submit the material to specialized labs for DNA-analysis. The aim is to locate, recorde, extract genotypes and investigate the organoleptic characteristics of the local vine varieties. The study will be implemented with the participation of all project partners. The results can have significant importance for the biodiversity conservation in the CB-region. Local traditional vine varieties can be an adequate response to the climate change and market orientation adaptation. Research and DNA-identification of grape varieties and proof of similarity between varieties in different regions; correlation of regional types of soil and local grapes (DNA analysis of grape and soil) will be elaborated. 2 Experimental fields will be developed as a pilot action for protection and ensuring the long term existence of the traditional vines in both regions.

An Ampelographic book will be developed with all relevant information regarding the cultivation of vines. It will contain not only the endangered varieties, but all local vine varieties from the BG and GR eligible area, forming a complete v...

Online training
Filling quests and and answering questions.
You will receive info about your knowledge in the field of grape .

The eligible area of the Programme consists of the Region of Eastern Macedonia-Thrace (Regional Units of Evros, Kavala, Xanthi, Rodopi and Drama) and the Region of Central Macedonia (Regional Units of Thessaloniki and Serres) in Greece and the South-Central Planning Region and South-West Planning Region (Districts of Blagoevgrad, Smolyan, Kardjali and Haskovo) in Bulgaria. 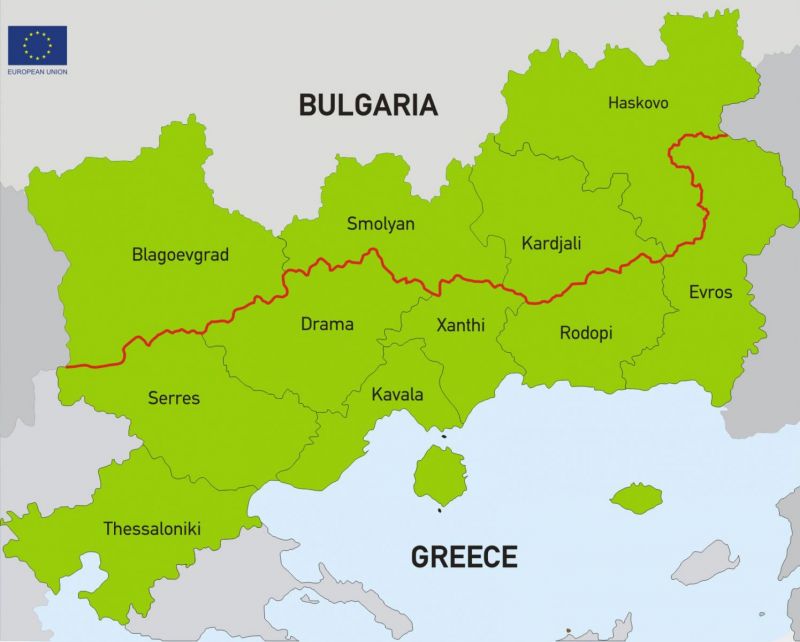 The Greece-Bulgaria cross-border cooperation area for the programming period 2014-2020 is identical to the current ETC programme. It extends to 40.202 km2 and has a total population of 2.7 million inhabitants. It covers four territorial units at NUTS II level (Regions), and 11 territorial units at NUTS III level (Districts). The eligible area extends across the entire Greek-Bulgarian border and is neighbouring with Turkey (east) and FYROM (west), both countries aspiring to access to the EU. It is part of the most south-eastern non-insular area of EU, and it is situated between three seas: the Black Sea, the Mediterranean Sea and the Ionian-Adriatic Sea. Finally, it sits at the crossroad of strategic fossil fuel pipelines supplying the EU market and TEN transport axes.
The settlement structure of the area is characterized by the presence of 10 medium-large cities (>50.000 inhabitants) which accumulate 38,2% of total population, and 25 small cities (10.000-50.000 inhabitants).
Despite the histori... Read more